Water intoxication is a genuine problem with dogs and one that really needs to be given much more visibility and attention online. In this help & advice blog post on Jug Dog we are going to delve into the world of canine water intoxication to help educate dog owners all over the world about it.

What is water intoxication in dogs?

Intoxication is to have too much of something and often when you hear the word it’s followed by alcohol or drugs. However, you can get intoxified by practically anything which includes water. Water intoxication is where a person or animal (in this case, dogs) has consumed too much water either by mouth or absorbed through the skin.

Consuming too much water is a form of poisoning and leads to complications such as hyponatremia (low levels of sodium (salt)) and/or the imbalance of electrolytes resulting in a disturbance in brain function. It is a serious condition to have which should be avoided at all costs as it can have life-threatening implications. 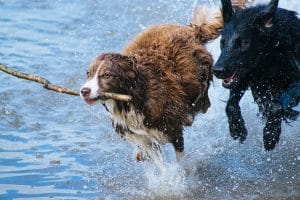 Which dogs are most at risk?

All dogs are susceptible to hyperhydration. However, it is more likely to happen in the following conditions:

Intoxication can happen quicker with less water for dogs with low body masses such as greyhound-like breeds, puppies, elderly dogs and sick dogs. Low body masses means it will take less water to reach a high level of water in relation to their body mass and sodium levels.

Dogs who live in or experience periods of extreme heat are more likely to need to drink more and potentially drink too much if the heat is particularly bad and they’ve been unable to take any shelter. Extreme weather and access to water is a bad combination and the proper prevention is to avoid heat and direct sunlight altogether. We’ve written a blog on this in more detail.

Dogs near a constant water source

Water can be absorbed through the skin as well as the mouth, prolonged exposure to water in situations such as swimming or water play can lead to water intoxication. Dogs can also swallow too much water when jumping into open water after toys or while hunting animals. Dogs who live near lakes or on properties with a swimming pool they use are at particular risk. Water-loving breeds such as labradors should also be carefully supervised near water.

In some extremely rare conditions, a dog may be suffering from a mental condition which compels them to drink more water even when they are already hydrated and not thirsty – this is called polydipsia. If you notice your dog drinking water non-stop contact a veterinarian immediately.

Symptoms of water intoxication in canines

Dogs progressing towards water intoxication isn’t always obvious. Many of these symptoms are also common with ailments and not just hyperhydration so be sure to first check with the ‘which dogs are at risk’ list. Here are some symptoms to look for:

Because a high intake of water causes neurological problems, dogs on the way to getting water intoxication can find themselves disorientated and unable to coordinate their movements like before. Look at the causes and this to determine if your dog has had too much.

Your dog’s body will try and defend itself and force the water out through vomiting. A dog with a lot of water in their system’s vomit may appear clearer and wetter than usual if over hydration is involved.

Dogs will appear nauseous and lethargic when filled with water. If your dog has been playing in water or drinking water excessively and now they look out of sorts and not their usual self then water intoxication could be involved.

An over hydrated pooches pupils will appear noticeably larger when hyperhydrated almost as if they were high. This is the result of the low electrolytes and the brain disturbances h20 can cause in large volumes.

Salivating and excessively drooling is often a symptom of a neurological problem in a canine. Having too large a volume of water in a body can seriously impair the brain which can manifest itself with a dog that is salivating profusely and or drooling.

A dog with too much aqua in their bodies can start to lose colour in their gums leaving them light and somewhat pink instead of the usual dark pink/red.

If water intoxication is serious and left untreated for a long enough period of time the dog’s body may enter self-preservation mode and force them to collapse. If your dog has reached this state then medical attention should be sought immediately and without any delay.

Alongside collapsing, a dog in an advanced intoxication stage may begin to suffer from seizures. Seizures themselves can cause serious neurological damage and medical attention is an absolute priority.

Here are a couple of suggestions on how to treat a case of water intoxication. Please use your best judgement whether you should self diagnose and treat your dog or seek medical advice from a vet first. Do not take any risks with your dog’s health.

The first thing to do with a dog who is overhydrated is to take them away from the source of water immediately and to bring them inside and to dry off.

Hyponatremia occurs when the salt levels of the body become dangerously low. If your dog isn’t too bad try and give them a salty snack to try and counter the water in their body – some simple snacks to try are peanut butter and some of your wet dog food and dry dog food if you stir some salt in there (not too much). Dog treats which are similar to jerky are also very salty and ideal for this situation.

Diuretics can cause canines to urinate more often which speed up getting the process of getting rid of the excess fluids. Always seek medical attentions from a vet before self medicating your dog. You will probably need to be prescribed diuretics from a vet.

Take your dog to a warm area to try and encourage sweating to get rid of more of the excess water from the body. Works well in conjunction with the extra salt and diuretics for mild intoxication.

How long does water intoxication last in dogs

In extreme cases of harsh intoxication with survival, permanent kidney damage is possible which will have lifelong effects on your dog.

How to prevent your dog from getting water intoxication

Preventing water intoxication starts with being educated on the subject matter so by reading this article you’re on the right track. Other tips to avoid the terrible experience are:

Keep an eye on how often you need to replenish their water bowl to see if they’re over doing it or becoming obsessively compulsive about drinking water. Make sure they don’t have an infinite source of water.

If your dog is playing with the hose, in the swimming pool (even kids one), in rivers, oceans or the lake then simply limit their time in the drink.

If your dog is going to be playing in water a lot then keep them fed with salty snacks to avoid hyponatremia.

2 thoughts on “Water Intoxication in Dogs”