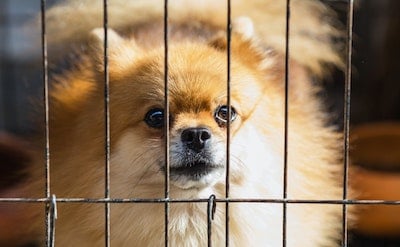 Not all dogs take to crates without complaint, especially puppies or adult dogs who are suddenly put into crates when they’re not used to it. The use of a crate is one of necessity; you might be using it to housebreak or to protect your dog from wandering around the house alone and potentially hurting themselves.

A common occurrence for puppies and adult dogs when they’re first introduced to a dog crate is crying which is an awful experience for both owners and dogs. But, the use of the crate is for the greater good – you know it needs to be done and it’s for the best but the crying is making you second guess your decision and perhaps making you let them out early.

We used one of our recommended dog crates with Jeff to housebreak and offer somewhere they can be safe and unable to hurt themselves from the start, it helped us housebreak him and climatise him to our home until he was old enough and mature enough to be left in the house outside of the crate.

He did cry at the start but it did not take long but before he was used to it and happy with it there. In this article we share our tips on how to get a dog to stop crying when they’re in the crate.

You can’t stop them from crying in the crate. What you can do is create an environment that will reduce the likelihood of persistent crying and whining, creating a nice and welcoming crate alongside gradually increasing the time they’re in there you’ll eventually have a dog who will love being in the crate.

If you want your dog to like the crate and not want to get out as soon as they’re in then it’s important to only put them in there when you need to. This is especially important at the very start when it’s a new thing for them.

If the goal is to make them WANT to be in the crate then forcing them to constantly be in it is going to accomplish the opposite.

Increase the length of time gradually

If your dog has never used a crate before, especially if they’re a puppy, then do not under any circumstance throw them in the deep end straight away for hours. On the first couple of uses your dog will likely cry because they want to come out and play.

However, what we want them to learn is that being in the crate is only temporary and they may as well relax and sleep while they wait. Therefore, for your dog to get used to longer periods later and not cry we recommend letting them in for increments which increase slowly over days and weeks.

Do not use it as a punishment

Never ever use the crate as any form of punishment. If you do that, then they will think they will have done something wrong when they’re in there and will be wracked with fear and probably cry more.

We want to make the crate a happy place and give them no reason to want to cry.

Always leave the crate door open so your dog can wander in and out at their leisure. It helps them to get used to it and that it’s simply a part of the furniture. Another great idea is to periodically place treats in the crate when they’re not looking to encourage wandering in and out.

Positive reinforcement can also come in to play here so that if they do wander in you heap praise on them to make them think that being in the crate is desirable behaviour. Dogs only want to make their owners happy and if they know being in the crate pleases you then it will reduce the likelihood that they cry and whine when they’re in there.

Tire them out before it’s used

Putting a dog or puppy in a crate who’s full of beans in a crate is likely to make them upset and want to get out. A tired dog is a good dog so you should try and tire them out before putting them, especially if it’s about to be a long stretch in there.

Fill their bellies and give them a drink

To eliminate the risk of your dog crying for food you should either give them a meal before they go in or at least a treat they can enjoy. Separation anxiety isn’t the only cause of dog crate whining, hunger and dehydration are other big causes, too.

Let them wee and poo before they go in

This is such an obvious one, really. As we’ve mentioned in every crate related article we’ve ever written; a crate is a highly effective tool for housebreaking – if you have got the correct size crate then they won’t want to soil their sleeping area.

If they are in the crate and they need to relieve themselves it will create a serious case of anxiety for them. They will be uncomfortable and desperate to wee and poo but they won’t want to soil their bed. Try and avoid this by waiting until they’ve done their business before putting them in.

If their bed is the most comfortable part of the house they are more likely to want to get into it for a nap and more likely to stay in there once they’ve sat down. Buy a decent bed which fits perfectly and wrapped in their favourite blanket. Put them toys in there.

Definitely don’t have any exposed wiring at the bottom.

Don’t place the crate near a radiator which could make it too hot and equally don’t place it somewhere which has a draught.

Lastly, we wrapped a blanket over the crate which made it a dark and snuggly den. Your dog may not like it that way but it’s worth trying to find out.

Give them a good toy

Giving them a good chew toy can help ease their anxiety and reduce tears. But, and there is a but, don’t give them any unsafe toys which can be torn apart easily and provide a choking hazard, Instead, give them something super strong such as a Kong classic.

Keep the crate in a quiet area

The reason why dogs cry and whinge inside of a crate is because the world is so much better outside of it. If the crate is placed in an area where people are always walking past then your dog is going to be distracted and wondering why they’re being punished and not allowed to get involved.

Avoid placing the crate in a high traffic area in the house so that your dog can relax in peace.

This one is perhaps up to personal choice but we found that covering the crate up to make it a dark and cosy den helped to get our Jeff to sleep in the crate. We only used the crate for sleep and no other reason, though, so it may not work for owners who need to keep the dog in even if it’s not nap or bedtime.

Once they’re in the crate, leave them alone! Don’t check up on them too much as you could end up waking them up and then you’ll have to deal with the fallout of that.

Once they’re in the crate and they’re crying there’s only two things you can do, ignore it and let them ‘cry it out’ or take them out and work on the above points. A dog crying in the crate is normal, especially if they’re puppies or it’s a new thing. But, you can take certain steps to reduce the risk of a poor experience by following our tips.