We receive questions on a daily basis from owners all over the world, today we’ve received a question from Karen, 27, from Thornton Cleveleys who asks “from time to time my German Shepherd Mike breathes very fast, noticeably faster than when he’s hot so we know it’s not that – should I take him to the vet?”

To answer your question first of all Karen, if your dog is breathing faster than usual and it’s not a ‘normal’ hot day then yes, please take Mike to the vet as soon as possible. As with many illnesses in dogs sometimes it’s just not worth the risk as they will never be able to tell you what’s wrong. Give them some water and take them to the vet as soon as possible is our catch-all advice. Dogs don’t tend to feign injury, probably the opposite in fact – if they look like they’re in some discomfort then they probably are.

Getting asked this question, however, has made us think that we should dedicate a page to discuss rapid breathing problems in an effort help educate and guide others if they ever encounter this issue, this will join our other health pages related to canine help and advice.

When a dog is breathing fast they are suffering from ‘tachypnea’ and it can seem very worrying if you aren’t already aware of what’s caused it. Most of the time, heavy breathing, fast breathing or ‘panting’ is relatively normal behaviour for most breeds of dogs and not a major concern. What is a concern is when the breathing is rapid, the dog is clearly uncomfortable and the panting excessive. The cause may not be completely obvious and this may get you worried.

Here at Jug Dog we aim to a helpful website for owners of any breeds not just the Jug and as such we have written this article to help people to understand and what to do if their dog is breathing faster than usual.

Why do dogs breathe fast

There are a few potential reasons why your dog is breathing fast so we’ve done the research to help shed some light on these and offer some advice if you suspect you know the cause.

Disclaimer: JugDog.co.uk are not a qualified source of canine medical help, and this guide is to be informative but not genuine advice. If you suspect your dog needs medical attention consult a vet immediately.

Heat stroke is possibly the most common cause of tachypnea, especially in the warmer months and is a great risk to dogs. Heat stroke occurs when the dog is overheating and unable to expel the heat quick enough, they may be dehydrated or just in an incredibly hot situation such as in a car or a poorly ventilated room. Symptoms of heat stroke are excessive panting, drooling, seizures, vomiting and weakness. It is a very serious condition which if left untreated immediately can lead to death.

To treat heatstroke before a vet’s intervention

Fast breathing is a respiratory problem in itself but there are a few other potential causes of changes in breathing such as laryngeal paralysis, pneumonia, allergic reactions and lung disease to name but a few. Generally, respiratory problems may make breathing heavy, strained and possibly painful as opposed to fast. Your dog may show clear discomfort to take a breath if they have a respiratory problem and you should consult a vet as soon as possible. Treatment is possible if the cause isn’t serious and it’s spotted early enough.

Although dogs are generally in better health than humans if they eat well and get plenty of exercise they can still get and suffer from heart problems at any age, which can lead to heavy and strained breathing. Now, diagnosing heart problems should not be done by yourself so if your dog is breathing fast, is lethargic, is exerting a whine or coughing then take your dog to the vet as soon as possible. Many heart problems can be resolved with medicine and a change of lifestyle so there’s no need to panic if the symptoms have only emerged.

Mitral valve disease is the most common heart disease in dogs which causes blood to leak back into the valves causing more stress on the heart. This can lead to an enlarged heart and of course – fast breathing (among other symptoms). 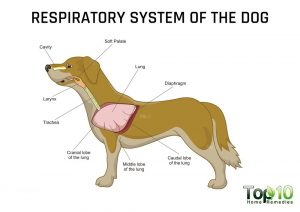 Although excessive exercise could also be paired with overheating/heat stroke it is nevertheless a fair common cause of fast breathing in dogs. Excessive exercise and overexertion can lead to rhabdomyolysis a condition common with humans who engage in activities such as high intensity interval training and CrossFit without proper rest, hydration and care. When exercising or being very active with your dog make sure to give them plenty of rest in between – dogs are keen to make their masters happy and that includes working past their limits.

Symptoms that your dog has done too much is fast and laboured breathing, drooling, a high temperature, collapsing, weakness, inability to focus, seizure. It should be obvious if your dog is suffering from overexertion as you should be aware they’ve been very active and then the symptoms follow. This is one of those cases where this is avoidable with prevention being better than a cure.

Although all dogs can be exercised too much, overexertion and rhabdomyolysis is more common in athletic and working breeds so be careful with those especially on hot days as they are more willing to just keep on working.

Cushing’s disease (also known as Cushing’s syndrome) is a nasty condition where the dog is producing too many hormones which creates a chaotic imbalance within the dog leading to lethargy, increased appetite, water consumption and of course heavy panting. This is a potentially life threatening disease and you will probably notice your dog isn’t right even without the fast breathing as Cushing’s disease produces so many different symptoms.

If you’re noticing your dog is much more hungry, much more thirsty but still lethargic then give your vet a call to discuss. However, don’t get panicked if your dog is merely peckish and panting due to hot weather as it can be easy to confuse that with Cushing’s.

Fluid in the lungs

Most dogs and even humans have some fluid in their lungs but a build up of fluid can cause major problems with fast breathing being one of the indicators along with lips changing colour and a low temperature. As with some of the other more serious causes of fast breathing in dogs, their breathing will probably not be the first sign that something is amiss. Fluid build up in the lungs is more often than not a byproduct of another underlying cause.

Seek medical help if you suspect your dog has more fluid in the lungs than normal.

Some of you may be familiar with the term eclampsia from humans having it will while pregnant; well, dogs (bitches) can get eclampsia too and it’s just as serious for them as it is for us. Eclampsia is a condition where there is a dangerous and sudden drop in blood calcium levels in nursing mothers. Typically eclampsia happens when the pups are between 1 and 5 weeks old. Eclampsia can show itself with the mother experiencing stiffness of the limbs, weakness, tremors and of course fast breathing.

The term anaemia in dogs describes a scenario where the dog has lost a lot of red blood cells, anaemia is typically a result of another underlying condition. The most obvious symptom of anaemia is the changing of colour of the gums from the normal bright pink colour to pale pink or even white. Your dog may also breathe fast and appear weak and lethargic. However, checking the dogs gums is the quickest and most obvious way to find out if they are anaemic.

As with most conditions here, if you suspect it is anaemia then seek veterinarian attention.

A word of caution: poisoning in dogs is quite rare and should be treated as a distant possibility if you find your dog is breathing fast. Poisoning can affect a number of things depending on the type of poisoning and the trigger. Onion poisoning can be a common cause of fast breathing in dogs. Along with fast breathing, poison is usually accompanied by salivating, vomiting, diarrhoea and blood in the stool.

To avoid your dog being poisoned avoid feeding them table scraps as many human foods can be poisonous, avoid having foods in areas the dogs can reach and always keep an eye on your dog picking up food from the floor when outside on a walk or in the garden. If your dog has eaten grass be careful not to confuse the effects of that with poisoning.

If you strongly suspect your has been poisoned then a trip to the vet is recommended.

The big c is a very rare disease to suffer from but it can lead to fast breathing, strained breathing and a myriad of other unwanted symptoms. If it’s lung cancer then rapid breathing is a rare symptom. However, lung tumours, specifically adenocarcinoma is more likely to cause faster than usual breathing in dogs. Both of these conditions are quite rare and usually only surface in dogs older than 10 so don’t assume cancer is the cause of your dog breathing quickly.

If your dog has an injury or in pain then fast breathing can follow. If you’re aware of the injury and you’re dealing with it then fine but if not just have a quick look around the dog to see if they’ve been hurt and see how they walk if they have a limp. Most minor injuries don’t lead to anything other than a bit of rest and whimpering so for it to lead to fast breathing it would need to be a serious injury such as laceration or broken bones; if that’s the case then a trip to the vet is next for some possible pain killers.

What to do if your dog is breathing fast

If your dog has only recently started to breathe rapidly then the first thing to NOT do is panic. Next, it’s time to have a think and a look around at a possible cause using the above information and your own relationship with the dog, consider:

If it’s only the above there, get your dog indoors or in shade and give them water immediately along with rest. See how they get on over a few hours.

If your dog has encountered one of the above then call your vet immediately.