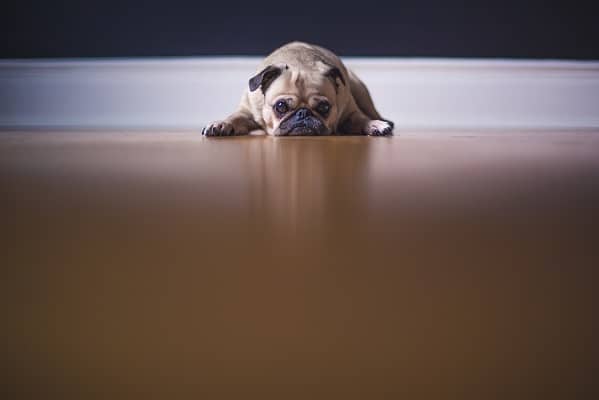 When your dog isn’t behaving like normal it’s a sign that something is not right and that their equilibrium is unbalanced. When a dog isn’t eating or drinking the explanation could be one of many and in this article, we help to explore the most common causes of this to help owners know what to do next with a dog who won’t eat or drink and just lays there quietly.

A sick dog is likely to be put off their food and water until it passes or they get some veterinarian attention and medicine. All kinds of conditions can make a dog not want to eat or drink but it would be the first place we go to when trying to figure this one out. Keep an eye out if your dog is trying to eat foreign stuff such as soil as this is another indication of an underlying condition.

Our first guess is gastrointestinal or some kind of a bug/virus such as Parvo, distemper or kennel cough. If it’s your puppy that’s off their food and just lays about then take them to the vet immediately and always make sure they are vaccinated and topped up.

Many sicknesses cause a lack of appetite and force-feeding them could give temporary reprieve before a permanent solution is found.

A dog who seems lethargic and not eating could be in pain, and the pain could get worse when they move and chew and that’s why they avoid it. Dogs with mouth ulcers, open wounds in the mouth or tooth nerve pain won’t eat because it just hurts to do it.

Your dog may have other injuries too such as wounds on the body or a digestive blockage that makes moving painful. A urinary tract infection is another painful condition which leaves dogs unable to move without feeling intense pain. Resting and laying about may often help as the issue may naturally get better with time.

Check the inside of the dog’s mouth and body for any obvious injuries and if you spot any take them to the vet.

Dogs can get depressed according to Pets MD and we have observed it ourselves from time to time. John Ciribassi, a canine expert, says that when dogs get depressed they will “…become withdrawn. They become inactive. Their eating and sleeping habits often change. They don’t participate in the things they once enjoyed.”

Sudden life changes can make a dog depressed and therefore laying about listless. Have you recently moved house? Have you brought home a new addition? Do they no longer get to enjoy the things they once had such as long walks and days out?

It may even be as simple as a change in their dry dog food to a lesser brand and their once loved mealtime is ruined.

Scientific evidence has found that dogs can mourn the loss of a fellow pet and most certainly a human. One of the symptoms of a grieving dog is listlessness and depression which in turn makes them not want to eat and be inactive throughout the day and night.

If you’ve recently had a death in the home and your dog’s behaviour has changed then there’s a good chance that grief is the cause of it.

Supporting a grieving dog is the same as a grieving human – they need time and emotional support as they go through the stages of grief and eventually they will be able to come to terms with the loss and move on.

Keep offering your dog food, water and a walk in the meantime because eventually, they will say yes. Another top tip is to try and stick to their previous routine as soon as possible.

Old dogs become less and less interested in exercise and will eat a bit less as a result. However, old dogs shouldn’t just stop eating altogether they’ll just eat a bit less, in particular, dry kibble as their teeth become decayed with age. If your elderly dog just doesn’t seem as interested in their food and water and does spend more time than usual laying down then it’s just normal behaviour.

If they’re old and they’ve stopped altogether then it may be a sign that they’re ready to pass away.

They’re telling you it’s time to pass away

According to Agape Pet Services, an elderly dog or a dog with a terminal illness will show signs of fatigue, loss of interest and a lack of appetite. We will never know if the dog chooses to do this so that their end is on their terms or if it’s the sickness doing it. What is clear though is thousands of owners across the World have corroborated with this behaviour during the final days of their beloved friend.

If you know your dog is getting very old or that they have a confirmed terminal illness then consider letting your dog go peacefully and put them down (put them to sleep) rather than let their illness make their final days painful.

Letting go of a dog is never easy but it is much easier for everyone if you take control of the situation and able to say goodbye properly as leaving a sick dog who isn’t eating and just sleeps there for too long can make for a grim surprise one morning.

Dogs love their food and their playtime so this kind of behaviour is unlikely to happen because of a good thing. If you have a young dog or puppy then the likelihood is an injury or a sickness and you should do some investigation but we recommend just seeing the vet.

If you have an elderly dog then a lack of appetite and lethargy should be expected as their body slows down, however, if it has stopped completely then a trip to the vet is recommended.