Dogs are well known to be lazy buggers and have various phrases created because of their snoozing habits such as “sleeping like a dog” or “let sleeping dogs lie”. However, if you’ve landed on this page we’re guessing you’re either curious about a dog’s sleeping habits or wondering if there’s something amiss with your own dogs. Well don’t worry, we’ve got the answers for your questions on how long dogs sleep per day.

We’ve put the word average in there on purpose as of course every dog is different and many other factors can affect their sleep such as activity levels, gender, breed, overall health and so on. In general though, they’re pretty accurate.

You may be wondering how on earth can a dog sleep for that long every day, and you’d be right to think that. Dog’s don’t sleep as soundly as we do and often drift in and out of it during the day – if you let your dog sleep on your bed notice how often they wake up, move around a bit and fall straight back to sleep. This doesn’t allow them to fall into a deep sleep as often which means they need longer to recover.

Dog’s are only active for around 20% of the day – that’s only 6 hours. If you ever feel guilty about your leaving your dog alone during the day then consider this. 30% or roughly 7 hours is ‘resting’ where your dog isn’t sleeping but not doing all that much either. The rest of course is spent sleeping. Now you see why many people see dogs as lazy. Of course, dogs aren’t really lazy it’s just the way they’ve been built – their bodies aren’t great at storing and using energy effectively when they are active so they really do need the rest. Of course, with working dogs that’s a different story.

My dog is sleeping a lot – is there something wrong?

If the above still isn’t making you rest easy, and your dog is sleeping more than the average or is visibly distressed when sleeping then perhaps there is another factor in play.

A poor diet may not give your dog the energy and nutrients it needs to function properly. Sleeping conserves energy if there isn’t a lot of it available. Consider one of our recommended wet foods or high fibre options.

Get your dog in good health with our recommended wet foods

A young pup and an old dawg both need more sleep than when they’re in their prime. Perhaps your dog is just slowing down in their old age? Puppies in particular do need an awful lot of sleep just like human babies do.

It’s entirely possible that your dog may be suffering from some kind of condition. If you’ve exhausted all other reasons and they really are sleeping way too much or even too little then a trip to the vet may be your next course of action. 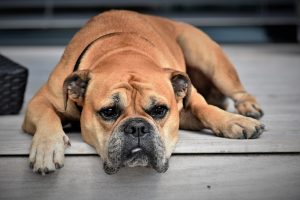