Home » Dog Grooming » What Is The Difference Between Hair Clippers and Dog Clippers? 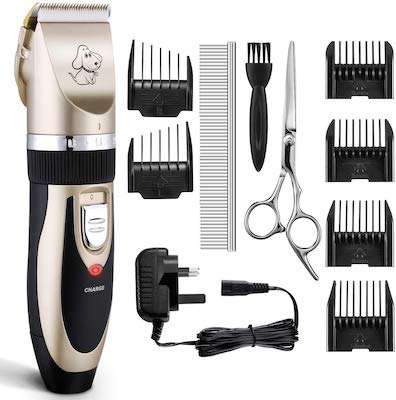 If you suspect your pooch is ready for a trim but you haven’t got yourself a proper dog clipper but you’re considering using your own hair clippers then this is the article for you.

They look the same and pretty much do the same job (to cut hair short) but that is where the comparison ends. Both of these kinds of clippers are specially made to match a certain type of hair among other things such as how they are sharpened, maintained and how much noise they make.

Article at a glance

The difference between hair clippers and dog clippers are:

Human hair clippers are typically not as powerful and the blades are thinner and sharper due to human hair being relatively fine when compared to dog’s hair. A human clipper is unlikely to struggle to cut the hair off no matter how thick it is.

Dog hair, however, is different as it is not ‘hair’ to begin with but fur. Dog fur is different in so many ways such as thickness, length and the fact that many dogs have double coats. Not only that, but most dog clippers also have different attachments to cater for the wide range of coats dogs can have – one size does not fit all with dogs as it can with humans.

There will be a larger gap between the blades to accommodate thicker hair coming between them. This is to reduce hair getting caught painfully mid grooming sessions. The materials used to make the blades are likely to be superior in dog clippers otherwise they would wear down and dull over time.

To summarise, human clipper blades have a shorter gap between blades and they’re thinner and sharper whilst dog clippers are thicker and stronger and made with tougher materials which come with different attachments to cater for different coats.

The motor inside of the clippers is one of the most noticeable differences between the two. Dogs can be afraid of the noise and vibrations caused by a pair of hair clippers so manufacturers need to make them lightweight and encased in basic soundproofing materials to reduce the noise and vibrations as much as possible usually lower than 60db. A human hair clipper doesn’t need the same treatment so they can be louder and vibrate more.

Power is also a factor in terms of noise and vibrations with hair clippers having more of it. This doesn’t mean that dog clippers are weak, however, just that the power has been toned down to ensure it is as quiet as possible.

One of the biggest reasons why you should never use a hair clipper on dogs is because it could terrify them and give them serious anxiety leading you to be unable to cut them without a great ordeal afterwards.

Speed of the blades

Dog clippers rotate at a much faster speed than hair clippers because the hair is thicker and may not cut after the first attempt, the speed ensures hair isn’t getting stuck and is cut effortlessly. Human hair is finer and easier to cut so the rotations per minute (RPM) is a little lower.

Dog hair varies from one breed to another so some manufacturers provide a variable speed option to cater for coarser hair or finer hair.

Length of the cuts

Human hair clippers offer a very short length very close to the scalp, this is safe for us to use and should not cause any injuries. This would be totally unsuitable for a dog as the hair close to the skin is different and the skin itself is much more sensitive and easily cut and bruised.

The closer to the dog’s skin you get the more likely the hair will be thicker, twisted and matted which increases the likelihood of painful tangles to deal with.

You can add attachments to a human clipper but the range still won’t be enough to cater to dogs with longer hair.

The accessories you get with a human clipper are not suitable for a dog such as a comb whereas dog clippers come with brushes to prepare the hair and sweep it up later. Not only that, but human clippers will also come with fewer length attachments and the range will be different whereas you can get almost double the length of attachments and different kinds to cater for coarse, wiry, thin, shaggy, curly and everything in between.

They may look the same but hair clippers and dog clippers are completely different and do the job in completely different ways. It could be dangerous and painful to use human clippers on a dog as the loud noises could scare them and the blades lacking in speed and length to avoid painful tangles. If you want to cut your dog’s hair get a good dog clipper and don’t take shortcuts.