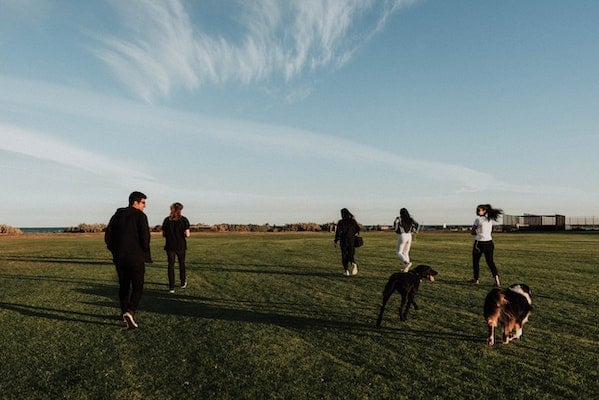 Dogs are well known to exhibit strange behaviour that baffles us. However, there is always a reason behind this that only the dog knows, which is really frustrating for dog owners. In this, we take a look to help those who are wondering why their dog circles around them, almost obsessively.

Potential reasons why your dog is circling around you

They’re going to the toilet

Some causes of strange behaviours such as walking in circles are innocent and completely normal. Dogs circling around before having a poo or a wee is very common and should not be a cause for alarm. Of course, if they are circling around you and then not emptying their bladder or bowels then, of course, this is not the cause.

Jeff doesn’t want to do his business just anywhere and he will often circle around me and spend a considerable amount of time finding the perfect spot. He has always done this and we have no idea why.

If your dog is excited and circles you while running at full blast then in our experience it’s a sign of a dog who hasn’t been exercised enough and is now making the most of it. Speaking from experience if Jeff hasn’t been able to be off the lead and running then the first chance he gets in the park he will bomb it around and circle us for a bit.

Not all breeds are going to be like this, some prefer a nice calm walk but others love to run. For whatever reason, if Jeff hasn’t had the chance to get his heart rate going for a few days and just kept on a short lead then “zoomies” will happen. Get the dog harness on and let them run wild from time to time to prevent this.

Have you found your dog circling you in a similar situation?

The vestibular system inside the ear helps dogs keep in balance, this system is a never which sits right inside the ear – an ear infection which has reached this far can cause a dog to be unbalanced and uncoordinated which can lead to your dog circling but no always around you.

There are three kinds of ear infections – otitis externa, media, and internal. To a layman, this means outside, in the middle and on the inside. Generally speaking, an ear infection which can lead to circling would need to be severe enough to reach internally.

An inner ear infection is a serious condition and needs a veterinarian’s attention as soon as possible. Ear infection in a dog is usually unmistakable, as they will have crusty, red and sore ears on the outside and a strong smell with pus on the inside.

If you’ve noticed your dog circling either around you or in general check the state of both their ears to see if there’s an infection at the root of the problem.

The vestibular syndrome is different from infection as it is a disease, most commonly observed in older dogs. However, an ear infection can develop to become vestibular syndrome. Along with circling, dogs can be observed knocking into objects and falling over easily as the disease completely disrupts their sense of coordination and balance.

Other causes of the vestibular system could be a bad head injury from a fall or after being struck but it could also be a disease brought on with old age.

It is important to have a think about any events which have led to your dog circling to determine a possible cause of circling around you. Have they recently had a bad accident? Is their balance way off? If so, don’t self-diagnose just take the dog to the vet as diagnosing and treating the root cause may reverse the effects of the vestibular syndrome.

Serious head injuries can cause a dog to become concussed and lose their balance among other symptoms which can lead to your dog to walk in a circle around you. Other symptoms are vomiting, dilating pupils and a lack of appetite. If you know for sure they’ve had a serious impact on their head then this is a probable cause of the circling.

Head injuries are pretty serious if they are not treated and given proper rest to recover, just the same as if a human gets it. Take them to the vet immediately.

Although it is rare, the obsessive-compulsive disorder can occur in dogs which manifests in them exhibiting strange and repetitive behaviour such as walking in circles. If left with no attention the behaviour can become worse and be chronic.

Obsessive-compulsive disorder is most common in rescue dogs and dogs who have experienced some form of physical or mental trauma. Walking around in circles around you may be one symptom of many alongside destructive chewing, digging or general uneven temper.

OCD is caused by stress and frustration and the cause of stress may be related to the behaviour they’re exhibiting. However, the dangers of trying to diagnose OCD is the fact that it looks just like a symptom which has an underlying cause at the root of it.

OCD is difficult to cure but it can be managed by finding the root cause of stress in dogs and medication to prevent it from becoming a chronic obsessive-compulsive disorder.

Canine cognitive dysfunction is a symptom of canine dementia/Alzheimer’s which is a disease which affects the memory of a dog along with spatial awareness and coordination. CCD can lead to a dog seeming listless who wanders around with seemingly no idea where they are going, this can manifest itself in circling around their owner with no idea what else to do other than continue the behaviour.

Although younger dogs can get canine cognitive dysfunction it is significantly more common in older dogs.

There are no cures for Alzheimer’s or dementia, sadly, and it will slowly take over your beloved friend. But, if diagnosed there are certain medicines a vet can prescribe which can help the cognitive dysfunction to help the wandering and spatial awareness.

If your dog starts to circle around you there’s no need to panic as in the vast majority of cases it’s a normal reaction and perhaps an obvious symptom for you to be able to diagnose an underlying medical condition. Never try and medicate and always seek a vet’s final advice before attempting any sort of treatment.