For those of us lucky enough to have a garden or even a yard attached to the house, dog poo can be annoying to always have to pick up accidentally. When the weather’s not great or you simply can’t take the dog out for a walk it’s the only place they can do their business and get some exercise.

Dogs who are getting plenty of fibre will be regular so we’ve got a fantastic idea for those with dogs that use the garden a lot – a dog poo bin!

What is a dog poo bin?

A dog poo bin is pretty much exactly the same as a compost bin which is fairly common in households with gardens or a dedicated area where the bottom of the bin is in contact with soil. It’s a place to seal in dog poo and break it down so that the microbes and organic stuff can seep back into the soil but the bacteria and bad stuff do not. It is a much better way to dispose of the dog poo than bagging it and binning it. 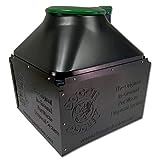 How does a dog poo bin work?

The dog poo bin is buried deep into the soil with the top the only thing which is visible. Being so buried and full of organic material makes it hot which breaks down the poo and along with water flushes the material into the soil.

With the Good Boy model, there are Bio-Activator capsules which consist of naturally occurring microorganisms which stimulate the bacteria in the poo to help decompose them quickly. The reason for these is to reduce the foul smell which can build up and protect the soil as many would be tempted to throw in household chemicals to do the job which would kill the land around it.

Is a dog poo bin safe for kids?

If you buy a purpose-built dog poo bin with a proper lock and keep the bio-activator away from them then it’s perfectly safe. The Good Boy model has a child-resistant twist. If you try and make one yourself that doesn’t close properly then no. According to US-based bin & junk professional Luke Hancock, dog poo can contain harmful bacteria so it needs to be cleaned up quickly and locked away regardless of your method of disposal.

However, with enough regular management and stirring and even mixing with other compostable material such as grass, food and flowers a dog poo bin isn’t any less safe than a regular composter.

How to install a dog poo bin in your garden

If you love a bit of DIY then here are some steps to create your own dog waste disposer:

How to maintain a dog poo bin

Dog poo bins won’t just maintain themselves automatically, they will need some small amount of maintenance from time to time. We recommend the following

What is the best way to dispose of dog poo in the garden?

From an ecological point of view, a dog poo bin in your garden is the cleanest way to dispose of it. If you bag it and bin it it will be disposed of with all of your other trash and potentially cause a biohazard in landfills, alternatively, dog poo which is disposed of in local parks will be incinerated which of course harms the environment.

What bin does dog poo go in?

If you’re not convinced about the dog poo bin at home and you want to know where it should go then the answer is simple – bag it up and put it in the normal bin with your non-recyclable waste. It’s as simple as that.