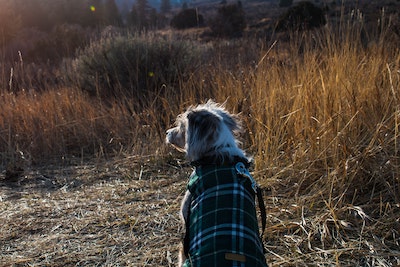 We advertise a range of dog coats such as waterproof versions and products designed to keep them warm in the winter. There are also vests which can help reduce anxiety. However, there are a lot of people out there who feel that putting clothing on a dog is cruel and unnecessary. In fact, the RSPCA says that people who force their dogs to dress up can be prosecuted.

As responsible owners and admin for this website which gets thousands of visits a day we thought it was the right thing to do to research dogs and clothing and whether or not it is right for us to recommend certain clothes and be in a position to give advice.

What clothes are there for dogs?

When we say clothes we mean any piece of material which attaches to the dogs body semi permanently. These include coats, fancy dresses, rain suits and actual dog clothes such as jumpers and body warmers.

Why do people put clothes on dogs?

Every owner has their own reasons for putting clothing on dogs – fancy dress is a popular method of having fun and often used for social media attention, sadly. Some owners put clothes designed for dogs just to bond with them and make them appear more human like but then there are dog clothes which are functioning such as the coats and suits designed to keep them warm and safe from the elements.

So, is it cruel to put clothes on a dog?

There isn’t a simple answer to this question quickly other than to say that it CAN be cruel to put clothes and coats on a dog, depending on the dog. When Jeff was a puppy we did what most owners did during seasonal events such as Halloween and Christmas and put a themed jumper on – he hated it but we persevered so that we can get a picture for social media.

As soon as the jumper was on, Jeff was scratching at it and wriggling around clearly trying to to get it off. He was visibly annoyed with it being on and we took it off soon after and never really tried to put anything like that on him again. We regretted it, of course, but we learned that if we knew that if Jeff didn’t like it being on then continuing to try and put clothes on him by force would indeed be cruel even if they weren’t in any physical pain or distress.

If you can relate to this story then we do feel that persevering to get them ‘used’ to the clothes being on is at the expense of the dog to serve the human. How would you feel if someone forced you to wear clothes which make you feel uncomfortable and no matter how often you protested they would carry on doing it? We would suspect that you’d feel it was cruel and unfair.

That said, if your dog seems happy to allow you to put clothes on them for fun or a fashion show then why not? Some dogs crave attention and if they know they are going to get it by being patient while you dress them then they’ll do that. It all boils down to choice and consent.

With the word consent it brings us to our final point – what is and isn’t cruel is subjective to the person receiving the treatment, we feel. If your dog hates having clothes on them and you force them to do it then that’s cruel, on the other hand if your dog loves doing it and the attention then it is not cruel.

Listen to your dog, let them decide.

However, there is another side to this story which can cause some confusion which involves items of clothing which offer a tangible benefit to your dog – namely waterproof coats, vests which help with anxiety and clothing designed to regulate temperature during winter. The question is whether or not it’s cruel to put on these kinds of clothes on a dog.

We are advocates that dogs need outdoor exercise everyday and there is no other substitute, if the weather isn’t great then it should be avoided but if the weather is ‘good enough’ then a waterproof coat can make it even more enjoyable. But, is putting these kinds of clothes cruel?

Jeff doesn’t like waterproof coats, either, so we no longer try and put one on and instead we walk him a short path and let him get wet. After all, he does have his guard hairs to keep the water from really soaking him. But would we think we were being cruel by trying to get one on? No.

Putting something beneficial on a dog despite their protests would be seen as ‘tough love’ by us, quite simply. You can easily make the dog see it as less cruel by ensuring they are given treats when it is on and then go for a walk straight away after. This way, they can associate the coat or rain suit with treats and a walk.

If they don’t get these clothes on they can’t be walked so it’s totally fine for them to protest but then it is up to you whether you force the issue and let them have their way. If your dog is still itching to go for a walk then go and get the coat out again and repeat this until the message sticks. By doing this you are not forcing the dog to do anything they don’t want as well as a mini training session.

Forcing a dog to wear clothes is never a good idea and unless they clearly get joy out of it, it is cruel. On the other hand, forcing a dog to wear something which offers a genuine benefit such as a rain suit is not cruel but it is up to the owner to enforce wearing it.