What does it mean when a dog puts his paw on you? – here at The Jug Dog we tackle all of life’s tough canine questions, even when there’s no definite or clear answer. We want to be known as an original and informative website, in today’s blog we take a look at another mystery of canine behaviour which your dog may or may not do and that is to use their paw to communication.

Dogs don’t just bark to communicate and a paw is much more than something to walk on or to use to dig with their nails (read our nail clipper reviews here). They’re very sociable and clever animals that will use every tool they have to send you, their owner, a message. Unless you’ve got a very long and close bond with your dog though it may be difficult to know why your dog puts their paw on you and what is it that they’re after. Your dog may be doing it for a completely different reason than your neighbour’s dog when doing it with them, such is the uniqueness of our furry friends.

The question we want to answer as best as we can is “What does it mean when a dog puts its paw on you?” Let’s begin and explore the many reasons as to why they do it and then you can see if anyone of them related to your own pooch.

Your dog may put his or her paw on your as a sign that they want attention. What they want with that attention is a whole question in itself though! Take a look around as the dog is doing this – are you all watching television paying to attention to the dog? Has the dog been largely left alone all day? Is the dog not tired and wants you to take them for a walk?

The goal here is to find out what next step gets your dog to stop doing it and then you can link them together, it may even become a new method of communication. When the dog puts their paw on you, take them for a walk and see if the dog stops putting a paw on you (doesn’t want walks) or if your dog carries on using their paw then thats a new signal for paw time.

Alternatives are to give your dog cuddles/belly rubs and try the same thing as above. 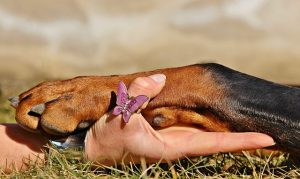 A more obvious reason as to why your dog has put their paw on you is that they want some food or water. When the paw is engaged go and check that the water bowl is filled. If they haven’t eaten in a while then perhaps it’s time to give him his wet and dry dog food. If your dog is watered and well fed then perhaps they’re begging for more and perhaps some treats – this can be a training moment for your dog to earn their crust so to speak.

Could your dog be feel anxious and insecure and they’re trying to reach out for assurance? Quite possibly! Does your dog show any other physical signals while putting their paw on you such as lip smacking, yawning and twitching ears – these could signs that you’re dog’s feeling anxious and they want some reassurance to know everything is alright.

Has there recently been a lot of noises in the house resulting from loud music, thunder & lightning, neighbours arguing, arguing in the house. Have you recently yelled or scolded the dog? If your dog’s feeling anxious the best thing to do is to distract them from the cause as opposed to reassurance as the latter confirms that there is a reason to be anxious and then they may repeat this behaviour if it happens again.

This can be linked with anxiety. Have you recently scolded your dog after some unwanted behaviour and quickly your dog wants to say sorry by giving you their paw? Dogs are clever enough to link your behaviour and body language to them being in the dog house so to speak, when this happens your dog may start to behave softly and put their paw on you as a way of making amends. It’s up to you how to deal with this situation as accepting the apology may not stop the unwanted behaviour in the first place as the dog knows that putting their paw on you will settle the matter.

If your dog is anything like our Jug, Jeff, then they will be big on physical connection specifically cuddles. Asking for some attention in the form of a physical connection might be the answer to the question of what does it mean when a dog puts his paw on you. If Jeff want some cuddles we would almost never say no and if we knew the paw meant “give me some room to cuddle” then usually wed make it but as with any aspect of training its up to you if you want to give in to this behaviour.

Should I let my dog put my paw on me?

Now that we’ve pretty much covered what does it mean when a dog puts his paw on you, it’s now time to think if we should allow it to happen and how can you stop it. Generally, a dog putting their paw on you is a way for them to ask for an outcome they want which means they are in control and perhaps that isn’t desirable behaviour. This can also be something they do to strangers visiting your house and if the dog has dirty paws then it can lead to some embarrassing scenarios.

To put an end to it, try these tips

So that’s that! Does your dog put their paw on you? What are they after? Please share your experiences in the comments below!