Ola all the way from Sunny Spain! My question for Jug Dog is – I’ve just got a Labrador puppy called Chester who is an absolute sweetheart but I’m wondering at what age does will he stop growing and become an adult? Do bigger dogs take longer to grow as I read on your site that Jeff was pretty much fully grown after a little over a year.

Thanks so much for the question, Diego! We’re so happy to hear we have readers across the water! As you’ve mentioned, we have covered how big Jugs get and how it takes them to get there in our ‘How big do (Jug Dogs) get’ section but now that we have become one of the most read canine resources on the web it’s about time we created an article to help non Jug owners to understand when their dog will stop growing. Let’s dive in!

When do dogs stop growing?

We’d love to come in and tell you that every dog will be full size in x months or x years but unfortunately, there’s a big difference between breeds which makes this question very hard to answer for individual owners but relatively easy for the general population. In short – the time it takes for puppies to stop growing varies from breed to breed as well as other factors such as diet, environment and genetics. If a dog is crossbred with a breed that is not the same size then you can often expect some random results!

But, we didn’t want to be completely unhelpful to our readers so below is some approximate growing times for size categories:

Small and toy dog breeds such as Chihuahuas, Bichon Frise, Miniature Daschund, Maltese, Shih Tzu and Papillons are usually the fastest to grow and should reach a full size from puppy to adulthood in approximately 10 to 12 months. Of course, external factors do apply so this timeline should be applied to small breeds with no birth defects who are raised on a healthy diet, with plenty of exercises and a happy home.

Small breeds such as Jack Russells, Beagles, Jugs, French Bulldog, Yorkshire Terrier, West Highland Terrier etc will take a little over a year to grow but still to the point where we’d still call it quite fast. Again, how long it takes for dogs to stop growing depends on a lot of factors which makes it very hard to predict precisely but you should expect to see a fully grown small breed of dog in around 12-15 months time.

Medium dog breeds such as Border Collies, Bulldog, Staffordshire Bull Terrier, Springer Spaniel, Basset Hound, Whippet etc should stop growing after around 15 to 18 months provided they have been raised on healthy food and an active lifestyle. This is around the average size and average time for a dog to get to full maturity.

Large breeds such as Labradors, German Shepherds, Retrievers, Boxers and Akitas can take a while to get to full size and depending if they’re a particularly big large dog breed then they could take up to 2 years to stop growing fully. Larger breeds such as the examples given are the first breeds which have a trait of having disproportionally large paws while they’re developing. A clue for you to know when your large dog has stopped growing is when their paws finally match up to the rest of their bodies.

Giant dog breeds such as St. Bernard’s, Great Danes, Azawakh, Mastiffs, Dobermans take the longest to stop growing from puppies and the most obvious dogs to have the disproportionate paw size as they grow. This means you’ll probably have an energetic, adolescent dog for longer when the breed is larger. Despite this, their lifespan is still around the same as most other medium-large dogs. Giant breeds are much more demanding when it comes to feeding them food and keeping them exercised while they are growing so remember to take this into consideration.

We have created a couple of pages to help you raise a happy dog: 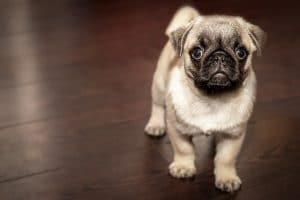 Do dogs go through the same phases we do when growing?

A study has found that a young dog’s brain works similar to a human child. To us, this means when a dog is growing starts off as a puppy (baby), then a toddler before being a teenager. This means that your dog will start to behave and learn similarly to a human’s just over a much shorter period of time. Have you ever had a dog who has up until then behaved like an angel have an off day? They may well have just become teenagers…

So, when dogs stop growing that is when they become adults and have their final behaviours and attitudes but up until then, they will go through various phases just like we did when we were growing up.

What to consider with fast-growing breeds

If you’ve got a fast-growing dog breed such as the ones mentioned above the most important thing to remember is that they are an adolescent for less time which gives means you’ll need to get your training done quicker!

Make sure they are socialised as soon as they are able to (when they’re vaccinated) and that you are strict and consistent with unwanted behaviours. Don’t forget to check out our page on dog training here. You’ll be astonished at how fast they’ll be growing right in front of your eyes and you won’t get a chance to sit down to search when do dogs stop growing once they’re home!

What to consider with slow-growing breeds

Slow growing breeds will be an adolescent and boisterous for longer. If you’re wanting to get a larger breed to be prepared to be patient as it might take up to 2 years for them to be full grown. They’ll be clumsy and often not realise their growing size as they get older and many people will be surprised how a giant dog can behave like a puppy.

However, on the flipside, they will be at that age where they are a sponge to training for longer giving you a much better chance of getting a well-behaved dog.