In general, dogs have great long term memories and can remember faces, people, smells and experiences. These memories they keep are important to keep for survival and thats why they do it, however their short term memory is very shaky and dogs can often be forgetful of things that aren’t that important. In an article by National Geographic they found that the average short term memory of an animal is just 27 seconds!

It’s important to remember how bad your dog’s short term memory is when you’re training them – if they are naughty then you will have a very short window to scold them, otherwise they won’t remember what they did to deserve it!

Despite this, dogs clearly remember their owners, their favourite smells, favourite foods, toys and generally how to behave. If you’ve correctly house trained your dog then clearly they remember the important stuff. They will also remember the bad stuff, dogs with behaviour problems tend to remember the times when they were mistreated or mishandled.

So, to answer the question “Are dogs forgetful?” Then the answer is yes – they can quickly forget minor, unimportant details but will remember important information very well.

If you’re concerned that your dog is really forgetful, to the point where it’s affecting their health then may be showing signs of canine cognitive dysfunction which is the dog’s equivalent of Alzheimer’s Disease. 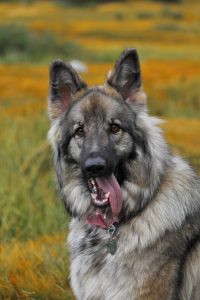 As dogs get older their bodies aren’t quite capable of what they used to – their joints can stiffen, their eyesight can worsen and their minds may not be as sharp as before. This is a completely natural process despite how tragic it is. Some telltale signs of canine cognitive dysfunction are

By forgetfulness we mean forgetting some of the things they should definitely remember – like where to go to the toilet, forgetting people’s faces (friends of owners that kind of thing). If you suspect your dog has canine cognitive dysfunction, first make sure there aren’t another reasons which could explain the symptoms – is your dog ill or has been ill recently? Is your dog being kept up at night because of external noise or possibly pain? Have they recently been through some trauma which could have caused anxiety? If you’ve looked at everything and can’t find any connections then it may be time to visit the vet.

If you’ve got a diagnosis then it’s time to do what you can to help your dog be as comfortable as possible, there is no cure of CCD but you can make their days more enjoyable for everyone involved.