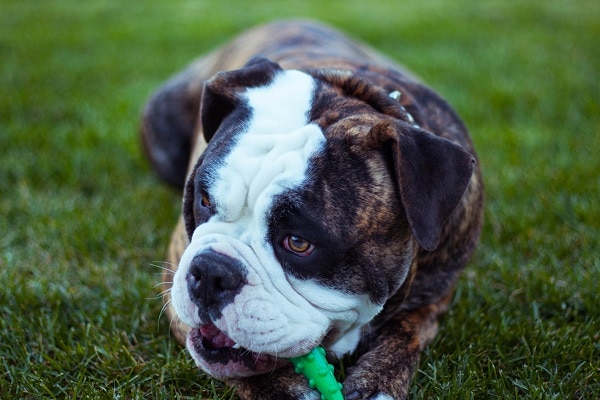 We’ve all been there; you visit a pet store or purchase a toy from Amazon for your furry friend and you can’t wait to see their face when you give it to them. You can see it instantly how much they love the toy but 5 minutes later it has been totally destroyed, there are bits of plastic and fluff everywhere and you’ve just wasted money once again.

Why are dogs so keen on destroying the things they seem to love? In our latest blog, we look to see why dogs destroy toys and what you can do to avoid losing so much money but still have something to keep your dog occupied.

It’s not appropriate for your dog

If you have a dog that’s an aggressive chewer, has powerful jaws and sharp teeth and overly excited when it comes to dogs then sadly you’ve not bought the toy which suits your dogs. Some dogs when they get a new toy can savour it and can look after their toys but others see it as a challenge and just want to tear into asap.

They don’t care how much it costs or what they’re going to do once the toy’s gone. They just want to destroy. If this sounds like your dog then what they need is an indestructible dog toy that will match their appetite for destruction.

Dogs who don’t have a large number of toys available or in a rotation get bored very easily so when they get a toy they will be thinking ‘finally!’ and tear into it like a child at Christmas. This really isn’t strange behaviour as bored humans tend to seek out something to do when they’re bored.

Dogs who do not get the opportunity to exert themselves physically from time to time during a walk or a run can turn destructive and set their sights firmly on their toys. Toys should not be heavily relied on to give your dog exercise at the expense of a good old fashioned walk otherwise your dog is going to just destroy every toy you give them.

If you’re sick of your toys being destroyed but fully aware they don’t get at least 30 minutes of walking time in a day then something needs to change in their lifestyle.

Dogs are descendants of Wolves and as such, they will inherit their natural prey drive and the desire to chase, catch and tear apart their prey. Dogs know that a dog toy isn’t edible or an animal but many with squeakers and shaped like small animals bring out these instincts.

Squeakers inside of squeaky toys mimic the sound of an injured or terrified animal and dogs are instantly drawn to it and want to keep hearing it as it reminds them of a successful hunt. Hearing the toy squeak in the distance makes them think that their prey is nearby in a state which makes them easy to catch and rip apart.

We personally can’t stand squeaky toys in the house because it does drive Jeff completely nuts to the point it gets annoying and he will jump on people and run around the house without thinking of the consequences. Jeff is more likely to destroy a squeaky toy than one that doesn’t squeak so we’ll either not get it in the first place or take the squeaker out.

To combat this, we recommend not getting squeaky toys for dogs who are unable to keep their prey drive under control.

If a dog toy is any good then it should make your dog interested in using it. What would be the point in the toy if they didn’t want to chew it, rip it and attempt to destroy it? The frustrating thing for us owners is, of course, the money wasted when it has been obliterated but as far as the dogs concerned they’re just acting on learned behaviour from puppyhood onwards.

When you first brought your pup or dog home did your face light up when you saw them playing with a toy for the first time? If so, your dog probably noticed how much it pleased you and they believe it will make you happy if they keep doing it.

They have problems with their teeth

Chewing helps clean teeth, sharpen teeth and alleviate teething pain and discomfort. If the act of destroying toys is a more recent phenomenon in the house then perhaps your dog is having problems with their teeth. Food could be lodged in, they may have chipped a tooth or perhaps if they haven’t been able to clean their teeth they could be decaying and are causing them a great deal of pain.

They love the challenge

Dogs will see toys like a challenge – they will ask themselves what do I do with this, how quickly can I destroy it to please my master. They may want to challenge themselves how fast they can destroy it with the help of their excitability and prey drive.

Destroying toys may be annoying to humans but to a dog, it may seem like the most normal thing to do. For a great product try the Kong Classic.

They have been allowed to do it before

If they’ve done it in the past and continued to be given more toys then why would they stop now? Humans need to take some responsibility for the behaviour of their dogs and they too need to make changes if they expect their dog to change.

Let them know that destroying toys is not on and if it happens there will be consequences.

How do I get my dog to stop destroying toys?

Some dogs are always likely to play rough with their toys and in these cases, the best course of action is to get them the right toy – we recommend indestructible dog toys which will be able to withstand the punishment and save you money. We’d also add to avoid squeaky toys and toys which resemble animals such as ones that are fluffy.

However, you are likely to help mitigate destructive behaviour in general by always making sure your dog gets plenty of exercises and they exercise good oral hygiene to lessen the risk of dental problems down the line.

Most dogs love to chew and there’s not much you can about changing their core desire to do so, it’s best not try and resist this and try and work with it.