In another ‘episode’ of Ask the Jug Dog, we have another winter related question from one of our readers:

The gritters will be coming out soon and I’ve always been worried about letting my dogs paw walk on it. Is it harmful to dogs and should I avoid it?

Thanks for the question, Greg! It is indeed almost time to see the gritters out and about on a regular basis as when we received this question it was the start of December. Council gritters spread rock salt on the roads to stop black ice from forming and making roads slippery and dangerous, a lot of this salt can reach common pathways that dog walkers may take. In this article, we hope to explain what dangers rock salt and grit could pose for dogs and best practices to ensure it doesn’t lead to any discomfort. 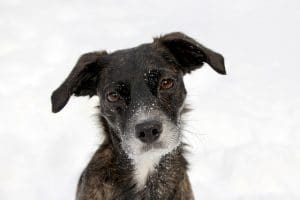 Rock salt that gritters use doesn’t come from the sea but from underground mines. It is brownish in colour with the texture similar to gravel. The reason rock salt is now used on the roads is that the three main rock salt mines in the UK are now more efficient and rock salt’s ability to lower the freezing point of water or de-ice existing water as it dissolves. Rock salt/grit is a marvellous and relatively easy way to keep roads safe in freezing temperatures but it does pose a bit of a problem for dogs.

Rock salt is sodium chloride which is a harsh chemical and a known skin irritant. Imagine walking barefoot for a period of time on a known skin irritant! This is a reality that dogs face every winter when the gritters spray their de-icing gravel and it’s not an enjoyable experience for them, in some cases, they may even need to be ‘hospitalised’ to recover. Prolonged exposure to rock salt can lead your dog’s paws to become dry, cracked and even burns to the pads in severe cases. Even a little bit of exposure isn’t great but prolonged exposure can be a horrible experience.

If your dog has an existing cut or wound on the paw then rock salt can make it extremely painful to walk on.

Rock salt is poisonous when consumed

Rock salt grit isn’t just a problem for paws, it can be even more of a danger when consumed. Sodium chloride is only one of the harmful chemicals which could harm your dog – rock salt can also contain mercury and lead as well as ferrocyanide.  If you don’t help your dog clean their paws after a winter walk where grit has been involved then they will attempt to clean their own sore paws which leads to the rock salt getting into their body. Consuming rock salt leads to poisoning with symptoms being dehydration, liver and kidney problems, pancreatitis and chemical burns to the mouth. This is a nasty combination that should be avoided.

Symptoms of rock salt poison include drooling, vomiting, diarrhoea and a lack of an appetite. It is not a pleasant experience to go through for both you and your furry friend. In severe cases ingesting too many of the harsh chemicals can actually lead to seizures, coma and death. The effects of rock salt poisoning are much more severe than their impact on paws but often the problem starts with the paws.

Should I avoid walking my dog in the winter?

You’re probably thinking with all the negativity surrounding rock salt it would be best to just keep your dog indoors for 3 months! But we wouldn’t recommend that at all, dogs still need regular exercise and without regular walks can become frustrated and naughty. This is similar to our advice when it comes to walking dogs in the rain or walking dogs in hot weather.

The first step to reduce the dangers of rock salt for dogs is to understand how to avoid and perhaps more important, what to do once the walk is over. So, to answer the question of “should I avoid walking my dog in the winter” the answer is no. Our next section will help you be able to have great winter walks without having to worry about rock salt burns or poisoning.

When you know there has been a grit spreading session make sure to avoid walking over the obvious brown piles of it. Obvious areas of grit spreading are council owned properties, school crossings and busy crossroads. You can’t avoid some grit on a walk but you can go a long way reducing how much your dog is exposed to.

Local parks with fewer roads and concrete will have less grit. Taking a more adventurous trail may help you and your dog avoid the salty stuff. If there’s an opportunity to exercise them and allow them to relieve themselves indoors that’s an option too.

Did you know you can get boots for your dogs? There are a few brands and styles available which can cut the dog’s exposure to the rock salt completely. The biggest downside is not all dogs can take to these boots and others will need some time to adjust. The upside is pretty obvious.

Wash your dog’s feet after the walk

One of the most important things you can do after a wintery walk is to wash your dog’s feet to stop their paws from getting chemical burns and to make sure your dog doesn’t like them after and get rock salt poisoning.

To wash them, put a cloth under warm water and gently dab and wipe their paws paying extra attention to the crevices of the paw so that none are left behind. Alternatively, dip their paws into a bowl of warm water before drying them with a towel.