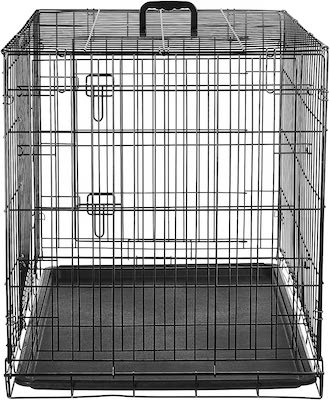 The use of dog crates is widely utilised in the UK as a means of housebreaking and providing a secure place for them to sleep and relax in which has a wired construction to make a den with. In this article we discuss how long is it appropriate to leave a dog in their crate when the door is closed.

This is a topic of particular interest to those with puppies who are kept in the crate to be housebroken and to ensure they don’t wander around the house unsupervised and for owners of dogs who are kept in a locked crate for safety and to protect the house from destruction.

Some owners will leave the crates open all of the time for their dog so how long they are in there is their choice and not really something to worry about. If they choose to be there for hours and hours why not.

How long should you leave a puppy in a crate for?

Puppies have underdeveloped brains, bowel and bladder control. This means that they can’t hold their wee and poo in for long and need to use the toilet often or will be forced to soil themselves, sadly.

Secondly, most puppies have been raised by their mother and several siblings and when you take them home it suddenly changes. They are used to sleeping close to others and feeling safe. With this in mind, suddenly being crated alone is a new and scary experience which can lead to a lot of howling and anxiety.

Thirdly, a puppy’s play is their work and they aren’t as likely to just want to chill as an adult dog would. Sticking them in a crate when they’re not tired is unlikely to yield any benefits to either the owner or the dog, at first. Puppies should only really be put in a crate if you absolutely need to or they need a nap.

As a rough estimate, a puppy under 10 weeks old should not be kept in a crate for more than 30-60 mins in a single stretch, and if they are to put in a crate they should have recently relieved themselves and had plenty of exercise.

If it’s bed time then these limits can obviously be increased but it’s unlikely you’ll have a puppy who will be content to stay in their crate for more than 4 hours. Therefore, we’d recommend trying to stick to the same time limits even overnight. Remember, getting a dog should mean making sacrifices and although they are nowhere near as demanding as babies they still need some extra effort during the night.

Even with these guidelines in place it is not as easy as sticking your puppy in a crate and leaving them to it. A lot of work by you needs to be done to get there and reaching these sorts of time limits happen in increments.

How long can you leave an adult dog in a crate?

This one is a little easier to answer. No dog should be left alone for more than six hours as long as they have access to food and water and even then it’s a bit of a stretch. This should only be done with dogs who are comfortable being left alone for that period of time.

A dog who is crated shouldn’t be left alone for any more than 4 hours, the cramp spaces and not being able to relieve themselves or have access to water and food would make it cruel to make it go on for any longer.

Some dogs will be fine with these long stretches but we don’t know if your dog is one of these so it would be irresponsible for us to give a more casual guideline.

We hope that you’re reading this article for some general information and not because you want to find the maximum time and then to put it in action. Overusing the crate will reduce its effectiveness in training and potentially cause the dog to harbour a dislike to the crate. Even if dogs use the crate and sleep in it it may not mean they like it.

We used a crate to housebreak Jeff and then we slowly reduced how much we used it. Today, we do not use the crate at all and he sleeps in his own bed with most of the house to himself.

We do leave Jeff on his own for around 4 hours some days and on rare occasions longer, we exercise him often, he has a whole house to himself to stretch his legs, gets natural sunlight, access to fresh water and food and is able to hold wee and poo for a long time (thanks to crate training) we don’t see this as cruel, in fact we think he enjoys it.

This is the place every dog owner should aim for but we would not underestimate the effectiveness of a crate to get there.