Hiya, we have a 2 year old Pug who from time to time sneezes 2 times in a row, he doesn’t look like he’s in pain or anything but we’ve always wanted to know why does a dog sneeze when we didn’t need to? There wasn’t any dust in the air so we’re wondering if there’s something wrong with him?

Sneezing is one of life’s more humorous and at times enjoyable moments in life and dog sneezing is arguably more humorous and we hope it’s enjoyable for them. Dogs are capable of sneezing just like us – they’ll start to make a funny face before unleashing a great big sneeze to everyone’s surprise, including their own. However, sometimes dogs may sneeze at times we wouldn’t expect or maybe consecutively which can raise some concern for owners if they are new to the world of dogs and not encountered this before. In this blog post, we at Jug Dog look at what can cause dog sneezing and why they do it.

Why Do Dogs Sneeze

Dogs sneezing is a completely normal behaviour, just like it is for us, and is usually a response to a foreign body in the nose area such as dust. A sneeze is just an involuntary expulsion of air triggered by sensitive nerves in the nose, when your nose detects a foreign body it will then begin a sneeze to get rid of it. Sometimes you may get a few sneezes in a row if there’s a lot of these foreign particles in the air but usually it will just be the one.

Sneezing shouldn’t happen all that often and may happen more often in Spring and Summer when there are more flower particles in the air. If your dog appears to be in some discomfort sneezing or is sneezing quite regularly then there may be another cause to explore which we will discuss down below in the reasons your dog is sneezing section.

Why do dogs sneeze when they play

When you’re having some proper good play time with your pooch which could be classed as ‘full on’, play fighting or intense you may notice your dog sneeze during it or throughout. Now, there’s a very special and cute reason why your dogs sneeze during play and that’s to let you know ‘Hey, playtime is a bit rough and tumble but I’m sneezing to let you know that it’s just play and nothing serious‘. There was a study mentioned by a few articles as to why this was a fact but unfortunately we’ve been unable to find it. If someone can let us know we would be happy to link to it here. The closest we’ve found is this one by the Canine University.

Either way, how adorable is this! When you get home today start a play fight with your dog and make it particularly intense and watch them sneeze when they get too boisterous to let you know it’s all good. You could even send us a video! A happy sneeze should be a short snort or a sharp exhalation and no mucus or gunk should come out.

Why do dogs sneeze when excited

Dogs can sneeze when they’re excited as a way of saying “I am really happy!” and the sneeze is their way to communicating that fact. Excitement sneezing is a perfectly normal and healthy behaviour to have and you should be very happy if your dog does it. An excited sneeze is more of a short snort of air and no mucus or nasty stuff should come out.

Why do dogs sneeze when they lay on their backs

Unlike when they’re playing or happy, a sneeze when a dog is on their back is much easier to explain. When a dog is on their back it makes it much easier for particles and other things to fall into the nose causing them to sneeze, this can include even water from their own noses and mouth which is the most common cause. Your dog sneezing when on his back is completely normal and nothing to worry about.

Other possible reasons why your dog is sneezing

If your dog has an obstruction of some sort in the nose or nasal area then they may sneeze to try and get rid of it. Hopefully a great big sneeze will get it done in only one or two attempts but if not see if you can help or take them to the vet. They will try and ‘flush’ it out with some liquid, similar to how they would clean their ears.

Take care not give your dog or puppy dog toys or tough dog toys that can break apart and cause the blockage. If you have a dog camera installed you can also review the footage to shed some light on the cause.

Yes! Dogs can get allergies too and they too can make a dog sneeze when they get it! Not the most common of causes as most dogs are bullet proof when it comes to the outside but it can happen. Poorly bred dogs or those who are kept indoors far too much are at risk of developing allergies. But, like we said, any dog can get allergies to all manner of things which can lead to sneezing.

Difficult to diagnose without crossing all other possibilities first. Have you recently changed your dog’s wet dog food or dry dog food? Or perhaps introduced a new dog treat? Foodstuffs can be common causes of allergies.

Irritants is a bit of a catch all term and may sound unhelpful but chemicals and liquids getting into the nose of your dog can lead to sneezing. Don’t let your dog be near you when you are using chemicals, especially ones that are airborne such as deodorants, aftershaves, sun tan spray etc. Strong smells are also bad for dog sneezing such as nail polish, nail polish removers and cleaning materials such as Brasso.

If it’s a harsh chemical or has a strong smell keep it away from your dog.

There are a few infectious diseases a dog can catch that can lead to sneezing as one of the symptoms. This is especially true for diseases that affect the respiratory system such as kennel cough and distemper. Chances are that sneezing will be one of many symptoms and it won’t be the sneeze that ticks you off that your dog’s not well.

Stay clear from diseases by keeping your dog’s crate and the best dog bed clean at all times.

You have a brachycephalic breed

A brachycephalic breed are breeds such as pugs and bulldogs with a short, squished face. They can get breathing problems in hot weather and with breathing in general which can lead to this breed suffering more readily to the above and below causes.

Nasal mites are a type of mite which live in a dog’s nasal passage. They are nasty little buggers which can lead to nasal discharge, itchiness, nose bleeds, sneezes and reverse sneezes. If your dog has these symptoms then take the dog to the vet for removal immediately. They aren’t life threatening but they can lead to very unwanted behaviour in a dog.

No need for a big explanation here as we all know dusty air can cause dogs and humans to sneeze. Check out some hypoallergenic dog beds. 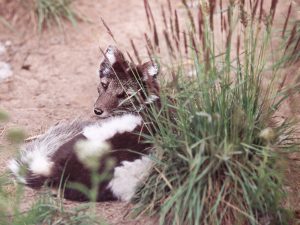 Foxtails are a real threat to your dog as they will latch on the inside of your dogs nose, feet, ears… anything, really and just stay there causing massive irritation. As Foxtails do not naturally break down they will lead to serious infections if left untreated. If your dog has a foxtail problem then it’s best to seek veterinarian help when you can before they become a real problem.